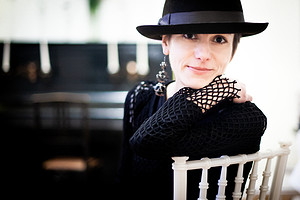 “...flashes of Argerich-type bravura and temperament back-to-back with those blissful moments of reserve we recall from Pires at her most focussed. (...) There was a chamber-music rapport with the orchestra reminiscent of Nigel Kennedy at his considerable best.” - Classical Source

Romanian pianist Diana Ionescu has established a reputation for her ”commanding pianism and mature musicianship”  (Musical Pointers) in interpretations of works ranging from baroc keyboard composers such as Scarlatti and Bach, through the classical purity of Mozart, Schubert, or Mendelssohn, to the romantic and modern grandeur of Schumann, Rachmaninoff, Debussy or Prokofiev.

She has given masterclasses at the Piano Week International Festival and Summer School, workshops for amateurs and disadvantaged children at vibrate!festival in collaboration with Kawai Europe, and holds a class at the Bucharest National University of Music. In 2015 she has founded vibrate!festival Brașov, Transylvania, an event that explores ways of refreshing the listening experience of classical music. Bringing together world-class innovative artists from all across Europe, the festival reaches out to a wide audiences through eclectic repertoire and cross-discipline projects in alternative spaces.

Born in Câmpina, Romania, into a musical family, Diana was brought up in the sonic philosophy of the Madrigal Choir, founded and directed by her uncle, Marin Constantin. At 7 she started studying the piano with Sanda Bobescu, spending weekends in Sinaia and being exposed to the musical personality of violinist and composer Constantin Bobescu. After graduating the George Enescu Music School, where she studied piano with Olga Szell, she was admitted to the class of Dan Grigore at the Bucharest National University of Music, where she also studied with Steluța Radu, Sandu Sandrin and Dinu Ciocan. In 2003 she moved to the UK, to continue her studies with Ronan O’Hora, Joan Havill and Marc Racz at Birmingham Conservatoire and Guildhall School of Music and Drama. She perfected her art with Viktor Merzhanov at the Tchaikovsky Conservatoire in Moscow, Alexis Weissenberg în Engelberg, Dmitri Bashkirov at Chapelle Reine Elisabeth in Brussels and in Madrid, and Richard Goode in New York.